"Tragedy, sorrow, and loss define Golarion’s history. Cataclysms undo cultural and technological advancements, periodically forcing human society into a state of relative barbarism and f lux. Earthfall, the catastrophe that brought about the end of mighty Azlant and decadent Thassilon—two of the most advanced human societies ever to rise on Golarion—marks humanity’s greatest resetting. A thousand years of darkness, fear, and savagery followed Earthfall, during which time the magical, technological, and cultural successes of Azlant and Thassilon were lost. Ever so slowly, though, humanity drew itself up from barbarism, as the great empires of Osirion and Taldor arose from the ashes in the Age of Destiny. Human civilization once again spread across Avistan and Garund.

A hundred years ago, humanity stood on the edge of a new age. Prophecies spoke of the return of the great god Aroden and, with him, a new renaissance for his chosen people in the modern empire of Cheliax. Instead, Aroden’s connection to his clerics grew silent, and the Inner Sea region was plunged into weeks of widespread storms and chaos. With Aroden’s death, mighty Cheliax fell apart, its outer territories escaping from its grasp in a series of revolutions and civil wars. In the north, the walls between worlds shifted, and Golarion inched ever closer to the demonic Abyss with the opening of the Worldwound. To the south, entire nations drowned as a vast and perpetual hurricane, the Eye of Abendego, manifested and brought ruin. The great prophecies failed, and humanity looked with apprehension upon an uncertain world. Thus was born the current era, the Age of Lost Omens." 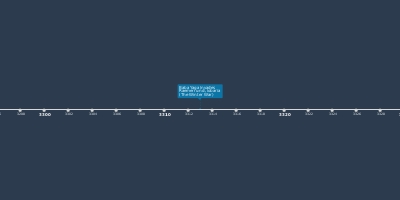