Made possible by the previous revolutions of thought that were the Renaissance and Reformation, The Age of Enlightenment or 'the Enlightenment' was a period of new ideas that inspired changes to government structure in countries across the world.

The period we call The Enlightenment is one of, if not the largest contributor to the development of classical liberalism as we know it today because all of the principle ideas of classical liberalism where defined and spread by the great thinkers of The Enlightenment. The Enlightenment, through the ideas of its greatest thinkers, was a major catalyst for events like the industrial revolution that supported principles such as private property and competition. Other history changing events that took place as a direct result of The Enlightenment include the French and the American revolutions that established massive support for classical liberal principles such as economic freedom, rule of law and individual rights and freedoms. A great example of one influential thinker whose ideas directly influenced these events is John Locke who was quoted by the leaders of both the French and American revolutions for his ideas surrounding the 'social contract' that a government has with its citizens where; citizens give power to a government to protect their natural rights and freedoms and if the government should fail then the citizens have the right to put in place a new one. 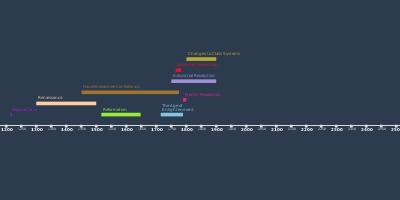 2 months ago
0
0
29
2.2.6 Timeline
How certain significant events in European and American hist...