The Holy Roman Empire (Latin: Sacrum Imperium Romanum; German: Heiliges Römisches Reich),[d] also known as Holy Roman Empire of the German nation,[e] was a multi-ethnic complex of territories in Western and Central Europe that developed during the Early Middle Ages and continued until its dissolution in 1806 during the Napoleonic Wars.[6] The largest territory of the empire after 962 was the Kingdom of Germany, though it also included the neighboring Kingdom of Bohemia and Kingdom of Italy, plus numerous other territories, and soon after the Kingdom of Burgundy was added.[7][8][9] Its size gradually diminished over time, particularly from 1648 onward, and by the time of its dissolution, it largely contained only German-speaking territories (although Switzerland and East Prussia were not included), plus the Kingdom of Bohemia which was bordered by the German lands on three sides. 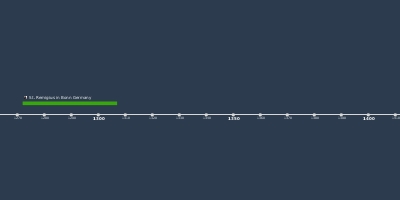