- slave and social activist who served several masters before suing for his freedom.
- Verdict was that as a slave Scott is not a citizen ( property instead) & could not sue in the federal court
- Court ruling basically stated africans has "no rights which the white man was bound to respect" & rejected the right of territories to ban slavery with in its border.

CAUSE OF CIVIL WAR:
-Led to hardening of anti-slavery attitudes
- reversed compromise of 1850, Missouri compromise & Kansas-Nebraska Act
-decision favored by slaveholders in south
outraged people in the north
greatly influenced the nomination of Lincoln 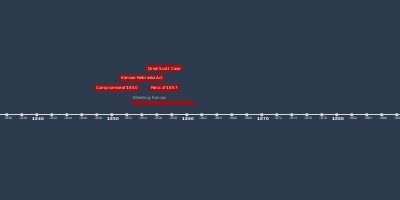