First British battle of WWI, by the Mons-Conde canal. At first, British easily defeated oncoming German troops with machine guns, but a loop made the british vulnerable, and they were ultimately forced to make a "tactical retreat".
1,600-2,000 casualties for the French and the BEF
2,4000 casualties for the Germans 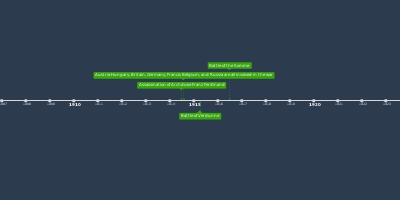