“Bas Cornelis van Fraassen (5 April 1941) is one of the most influential champions of anti-realism in the philosophy of science. In his book The Scientific Image (Oxford, 1980) he defended the view that the goal of science is empirical adequacy – truth with respect to directly observable phenomena – not truth at the level of unobservable or only indirectly observable entities. He was able to avoid the main pitfalls of positivism and instrumentalism by rejecting the demand that claims about the unobservable be construed as indirect claims about observable phenomena or otherwise be deemed meaningless or without truth value, insisting only that establishing the truth of such claims was no part of the goals of science, and that belief in such claims should play no role in acceptance of scientific theories. This position, which he called ‘constructive empiricism’, is also distinguished from other forms of antirealism in philosophy of science in that its focus is on observable rather than observed phenomena, no matter how remote the phenomena may be in space and time. In this way empirical adequacy concerns also early epochs in the Earth’s history, and indeed cosmology. Van Fraassen has also contributed extensively to philosophy of physics, including philosophy of space and time, quantum statistics, and on the measurement problem of quantum mechanics.” (Philosophy of Cosmology) 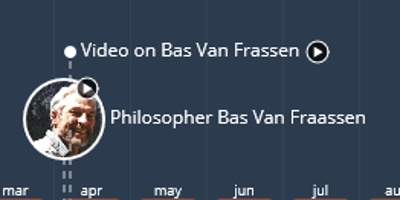